For me the art is in the first place an area of knowledge, just as religion and science. On the one hand I think it is impossible to take the art out of the contexts of art theory and art history. But on the other hand, I am quite aware that the art is subjective and irrational, so that we can process it with so-called second-order feelings. The art in itself is a powerful intellectual and emotional regulation tool of the human’s communication with the outer world. For me it is relevant to know that I am a part of the cognitive process and to make clear that I strive to open new horizons. 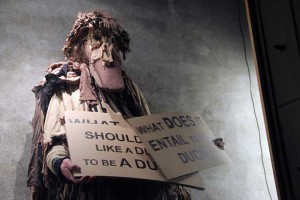 met with coordinator of Bern-Moscow exchange project
Anna Fatyanova to talk about his work and his understanding of art.
Read full interview

Sergey Kishchenko, the artist-in-residence in Bern (residency.ch), met with coordinator of Bern-Moscow exchange project Anna Fatyanova to talk about his work and his understanding of art.

Anna Fatyanova: Sergey, this is your first time in Bern, isn’t it? Have you already had a chance to experience the town?

Sergey Kishchenko: Yes, in fact, not only the town, but also the water in the river.

S.K.: They told me about the custom of the primeval union of Bernese with the nature, which amazed me. People who live here namely use the river to get somewhere. They take off their clothes, put them in a waterproof backpack and drift down the river. I was eager to go on this trip and experience the process, but as it is impossible in winter, I had to find a way to submerge just my sight.

A.F: So you dipped the camera in the river, I suppose.

S.K.: Yes, and at some point myself too.

S.K.: While filming I accidentally set the camera loose and had to plunge into the water to get it.

A.F.: What a story! Now please tell me about yourself.

S.K.: I have always been creative, even as a child I took music and art lessons, went to photography and drama clubs. After high school I studied at the Russian Academy of Acting Arts, so I have a degree as a theater and movie actor. But my acting career was not long. My interests shifted to photography and graphic design. I finished several photographic projects that meant a lot to me. I was always interested in video-art and collaborated with the artist German Vinogradov. It was natural for me to focus on artistic activities and decide to pursue them professionally a couple of years ago.

S.K.: Yes <laughs>. I studied at the ICA Moscow, the Open school Manege / MediaArtLab, I also did an internship at Goldsmiths, University in London.

S.K.: As it happens I employ media synthesis. For example, in the Duck Test #4. Cherry project you will find performance, theatre, film, video-art, installation, and photo-documentation.

A.F.: Does this mean a continuous process of exploring and searching?

S.K.: Exactly! For me the art is in the first place an area of knowledge, just as religion and science. On the one hand I think it is impossible to take the art out of the contexts of art theory and art history. But on the other hand, I am quite aware that the art is subjective and irrational, so that we can process it with so-called second-order feelings. The art in itself is a powerful intellectual and emotional regulation tool of the human’s communication with the outer world. For me it is relevant to know that I am a part of the cognitive process and to make clear that I strive to open new horizons.

A.F.: How do you work with these tools?

S.K.: I consider a work of art as a part of the global process enabling the intercultural communication, in which the art piece is not the destination point, not the result, but one step in the continuous development and a link in the chain of the infinite media reality.

A.F.: Do you mean the Internet?

S.K.: Yes, although not only the Internet, but rather the nonmaterial, nonmonetary value of the art and the endlessness of signs and reference points in the media world.

A.F.: I found following passage about you: “Sergey Kishchenko operates with the modern understanding of democratic ideals, illusions and dreams in the post-Soviet Russia. By developing the contemporary mythological environment he explores the emblematic attributes of the cultural tradition in their new rendering.” Please tell me, what is it about?

S.K.: I am concerned about the future of my country and the problems of its democratic formation. I dream about being part of the democratic society in Russia, in which the laws are observed, in which the human rights and freedoms are respected, in which I would like to live. I try to understand, why all reforms, all modernist movements, all innovations inevitably devolve into regression and archaism.

I dealt with these problems in the Stem Cells project. There is a word play in the title, because in Russian we use the same word for both stem and trunk. In my case I did not refer to the biological term, but to objects made of round timber trunks. I combined the modernist grid with the Russian log cabin layout. It resulted in a sort of grid-cabin, being a metaphor for Russian mentality. It may be solid and transformable, but its modernization potential is unavoidably shaped in archaic forms, adorned with the elements of a primitive Russian cottage. Stem Cells is an architectural installation, now existing as small models. My dream is constructing a whole village of such full-size objects. Among other aspects, this installation represents the inheritance model of how the Russian mentality replicates. That is why it is called Stem Cells. The biological stem cells are surely the wonder cells, which carry complete genetic information and are responsible for the production of new cells and regeneration of lost organs. In my project the wonder stem cell is seen through the optics of Russian consciousness and becomes part of a huge log house, being a prison made of cells.

Many of my works – Stem Cells, Ideals of Two Revolutions, Paradigm Parasitism, Dictatorship Is Never Foreign – explore the social identity of a post-Soviet citizen and totalitarian way of thinking.

A.F.: And what about your show-case performance?

S.K.: It was called Duck Test #3. Questions and Doubts. It was conceived as a humorous test of obviousness, just like in “If it looks like a duck, swims like a duck and quacks like a duck, then it probably is a duck”. I contemplate the art, the role of the artist, and the moment when the artist’s activity becomes art, and so on. The main character of the installation is the duck-human, my alter ego, the container for my subjectivity. To find himself, he uses the duck test, albeit administering it inversely – he dons different forms and features of various phenomena, substances and notions. In this way he tries to overcome and determine himself.

My next work in this series is called Duck Test #4. Cherry. Now the duck-human gets over inner complexities by submerging into art and literary history of the world on the apocalyptic post-industrial ground. It plays in a mythical garden, the character looks for escape from his borderline case, but it is impossible – all paths begin and end in this garden. I have used monologues from Chekhov’s The Cherry Orchard. He wrote this stage play just before the revolution of 1905, the garden is one of the main characters of the piece, it symbolizes the Russia of nobility. In contrast, Duck Test #4is set in the remains of the ZIL – the enormous car plant, which once was the symbol of the Soviet rule and now is abandoned and tumbledown. 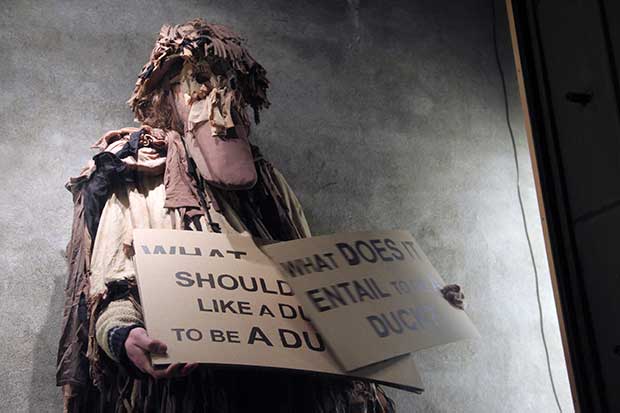 A.F.: Sergey, thank you very much for such an interesting talk! It was pleasure to work with you. Hope to see you in Bern one day again. So maybe next time you will get an opportunity to experience by yourself this beautiful river trip in the Aare, which your camera already enjoyed in the cold winter time.